Some well-known Whittier families emerge from entries in the "Trinity Chimes":

10/31/1937 From the guest book, Albert Urich of Whittier
Otilda Urich was the mother of Roy, Carl, Albert, and Frank Urich, and two daughters. George R. ―Frank‖ Urich would become the inventor of the self-service gasoline station and work for 65 years in the distribution sector of the petroleum industry. For many years, three corners of the intersection of Whittier Blvd. and Greenleaf Ave. would be occupied by a Urich’s gas station, a Urich Lincoln Mercury dealership, and the Urich Oil Company. Brother Roy and his wife Martha were long-time members of Trinity.

An April of 1938 ―"Trinity Chimes" has attached what appears to be the first edition of a  one-page ―District News publication. An interesting item is noted:

―Chaplain Du Brau continues to serve nearby camps of the Civilian Conservation Corps. At the fifth anniversary of the CCC he addressed 185 enrollees near Santa Ana at the request of company officers and men. (On March 9, 1933, during the worst of the Depression, Congress established the CCC  under which 300,000 jobless young men were set to work on conservation projects.)

7/24/1938 ―A light is to be placed outside our Gethsemane window to illumine the    window during evening services. . . 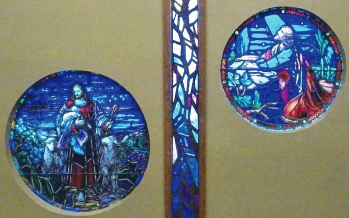 The "Gethsemane window" was high over the altar at the old church on Pickering and Penn. The ―Good Shepherd‖ window was above the entrance to the church. When the church building was torn down in 1960 the windows were saved and in 1984 when the Fireside Room was built, the windows were placed on either side of a new stained glass 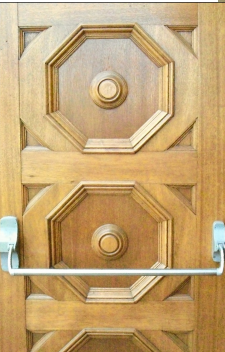 The solid wood, raised panel doors from the old church were sold in 1960 to restaurateur Bill Bullard and installed in the Trapper’s Inn of La Habra where they stayed for forty years. When the Burch family bought Trapper’s Inn and began its demolition in 2000, Hans Thomsen was able to contact the Burch family, who ended up donating the doors to  Trinity. The doors and windows are together again and may be joined in the future by  a chandelier from the old church which Hans is restoring.