Old newsletters and Voters meeting minutes give some interesting information for 1960 and 1961:

March 1960 newsletter:  Trinity's bowling team is in second place in a 20 team league.

March 1960 Voters meeting:  Authorized Board of Education to establish a kindergarten.

May 17,1960:  A Mother/Daughter Banquet, sponsored by the Trinity Women's Service Guild (LWML), had 250 in attendance.  Highlight of the program was the presentation of the "Wedding Belles of Yesterday" (narrated by our own Mrs. Darleen Zarling and the pastor's wife, Vi Wolter.)  The oldest gown shown was from the 1860's.  In all, about 25 gowns were shown.  Of special interest were the gowns worn by the three Winkelmann sisters who married three Thomsen brothers.  Each sister modeled her own gown.  The dinner was prepared by the Guild members and served by members of the Men's Club.

October 1960:  The sale of the church on Pickering and Penn is expected to close escrow on November 5th.  The Reformation service will be the last service there.

The beginning of 1961 saw the congregation adapting to using the Parish Hall for all services.  Instructions were given in the January newsletter for being ushered "up" for communion. There was a movable altar, lectern and pulpit brought from the old church but of course, no communion rail.  So a white line extending from the pulpit to the lectern was used as a guide for standing at the Lord's Table.  There were also instructions for entering the Hall for services that I found rather amusing:  "The last five minutes before worship, the ushers will walk you and your family from the entry door to your seat.  We ask that you kindly follow them to the place where they desire to seat you."    Somehow I don't think a lot of people were late.

2/14/1961  Established a "New Church Planning Committee".  (Progress reports were given every month at Voters meetings.)

10/15/1961  The church had held mission festivals since the early days, usually with an afternoon service conducted by a guest Pastor.  By the 1960's the morning service would have a guest Pastor and there would be displays and information about our mission work.  In the adjoining newspaper article note that the location of the picture is the "parish hall narthex".  This would now be the narrow hallway between the Fireside room and the gym.  Before the Fireside room was built in 1984, this area was a wide narthex with a window facing the courtyard that is now the Fireside room. 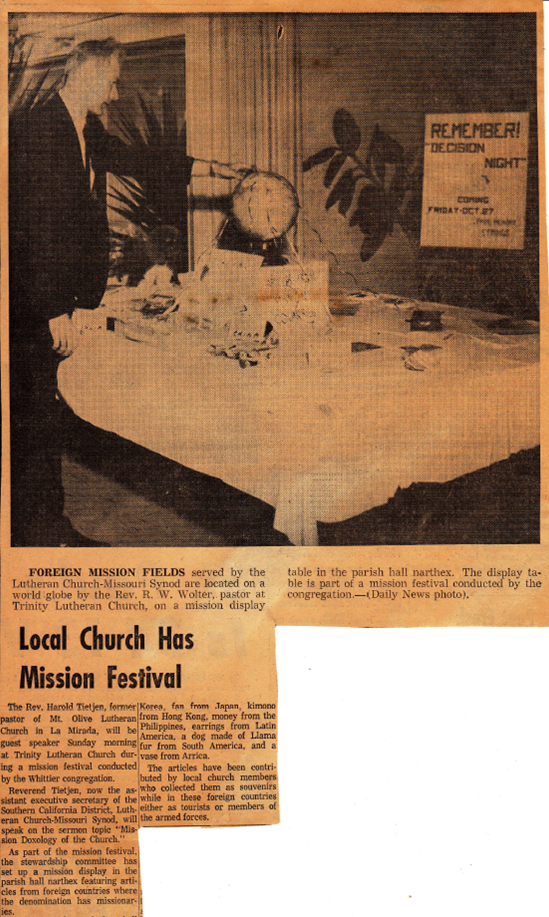